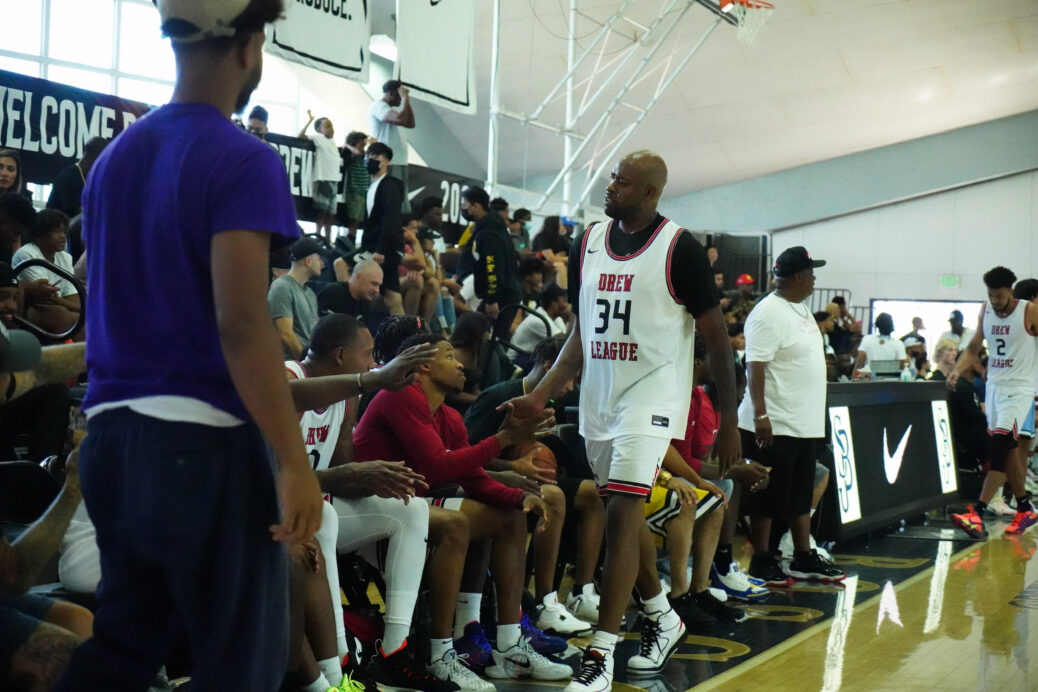 This year marks Coach Mike’s 10th year playing in the Drew League and according to him, this will be his last year wowing the crowd on the hardwood.

This will be my last year playing in the Drew. Lol. I’ve had so many awesome memories since 2010 and although I still plan on playing the game, I want to move on to other ventures and opportunities and of course continue pouring into the next up!

The Drew League has become a mecca for athletes at every level of the game. To share the hardwood with NBA players, International pros, Drew League vets and the next up is undoubtedly an unmatched experience. Coach has played against some of the best competition on the west coast and as some of our mentees are now carving their own lanes on the hardwood, what better way to reach back and guide forward by mentoring our Pro Club athletes on the main stage.

For me,  it’s all about helping the next guys coming up behind you. When you see them going hard everyday putting the time in to perfect their game, it’s a great feeling to help put them in position so they can shine and gain notoriety. That’s what mentorship is all about to me; preparation meets positioning meets opportunity. If there’s anything that I can do to make that happen or meet them halfway, that’s what I will do. This year I was able to help one of our Pro Club alums who just returned from playing his rookie year overseas. I was able to place him alongside me on the legendary Cititeam Blazers where he is definitely earning his seat on the bench and displaying his work as a 1st year pro.

Coach Mike understands the work ethic it takes to be successful on and off the court and how important it is to always be ready for your opportunity. Playing in leagues like the Drew League, helped him get ready for opportunities to play professionally especially at the start of his playing career 10 years ago. There were also people like Keion Kindred and Roland Jones who saw his talent and passion early on and recruited him to join their team, Nationwide All Stars.

I was recruited by Coach Keion Kendred and owner of the Nationwide All Stars, Roland Jones. I met them both while playing in the ABA back in 2009. I went to play my first professional season in Australia and once I returned, I got my first opportunity to play for them at the legendary Washington Park. It was my first introduction to the Drew League and I am forever grateful for the opportunity from those guys. I learned so much about myself as a player and a person throughout those early years that help me grow as a man, a professional, a coach and mentor. I realize now,  my journey was all in preparation of my mission now. As more players asked me about my experiences, the greater the impact I was making beyond the game of basketball.

Knowing this is Coach Mike’s last year ( 😉 ) playing in the Drew, I’m sure the end of summer will be a bitter sweet experience. When Coach Mike retired playing pro ball, he did it so abruptly and without announcement. However, with the Drew, let’s be honest, we’ve been hearing talks of retirement the last couple of summers but somehow he gets drawn back in! I guess we will have to wait until next summer to know for sure. We get it though; the anticipation each of year to know that anybody could walk into the gym and then boom, a once in a lifetime experience can happen. Including meeting your childhood idol.

I’ve had so many cool experiences, but the one that stands out the most to me in recent years is the championship run with Nationwide All Stars in 2018. We came up short, but I was able to meet my childhood idol, Scottie Pippen, I was also excited to play in front of him and the late great Kobe Bryant. There was nothing like the feeling of displaying your talents in front of the entire city. No matter the results, for me it was about leaving it all out there on the floor. It was the highlight of the summer at the Drew as well as with my program. We were making strides and helping to jump-start the careers of our mentees and I was more motivated than ever to do whatever it took to fuel our organization’s mission. I felt like it was my last summer playing because I wanted to focus on what I was doing off the court. I obviously returned the next year lol but was thankful then that I was able to still play and still pour into coaching and mentoring without feeling like I wasn’t giving my all in all.

So what’s next for Coach Mike and the Great Gain brand???

What I wanna do next is focus on fostering more community partnerships and creating more brand awareness to further our mission. We’ve also have other projects in line including the launch of our scholarship program giving more kids the opportunity to play for our AAU program, So Cal Fierce Basketball. The more and more I dedicated my time to business and brand building the less time I have to play the game at a high level. I don’t know what tomorrow holds, but I definitely feel like creating opportunity pathways for the next up, the kids and young people is at the forefront for me now.

With the pandemic leaving us all uneasy about this new way of life; the return of basketball indoors for many fans and player alike definitely evoked feelings of normalcy again. As Coach Mike just said, “I don’t know what tomorrow holds”, we thought it was important now more than ever to capture as many memorable experiences as possible to look back on. Here are some of the photos from week two of the Drew League from the 2/0, Cititeam BLAZERS.

Stay tuned for more content from the GGA Inc family!

We're not around right now. But you can send us an email and we'll get back to you, asap.